Vice-Rector for Academic and Scientific 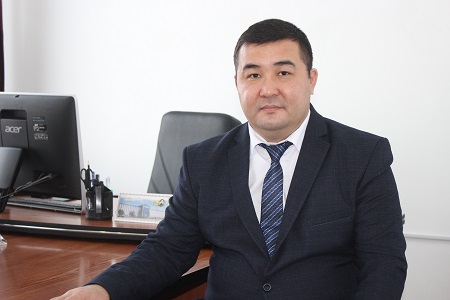 Temirbekov Nurlykhan Mukanuly, was born on February 26, 1982 in the Zhambyl region, Turar Ryskulovsky district, in the village of Abay.
In 2003 graduated with honors the Kazakh National University named after Аl-Farabi (KazNU) on specialty «Mechanics» with assignment of qualification mathematician in the field of theoretical and applied mechanics.
In 2005 graduated from the magistracy Kazakh National University named after al-Farabi with a degree in Mechanics with the assignment of an academic master's degree in mechanics.
He defended the thesis for obtaining the scientific degree of candidate of technical sciences on the topic: "Effective implementation of numerical methods for solving viscous gas equations" in specialty 05.13.18 - "Mathematical modeling, numerical methods and program complexes".
From September 2005 to August 2007 - a teacher - an intern at the ЕKSU them. S. Amanzholova.
From September 2007 to December 2009 - a teacher, since January
2010 - senior lecturer of the department of mathematics of the EKSU named after. S. Amanzholova.
From September 2010 to June 2011 - the Head of the Department of Informatics EKSU named after. S. Amanzholova.
From June 2011 to December 2017 - the Dean of the Faculty of Natural Sciences and Technologies.
Participated in the implementation of several scientific state / budget and
households / contractual topics, whose customers are the MES of the RK;
SA "East Kazakhstan regional administration for realization environmental programs ";
SA Department of Natural Resources and Regulation nature management of the East Kazakhstan area ", Research Institute of Mathematics and Mechanics of KazNU. Аl -Farabi.
Nurlikhan Mukanuly is the author, has more than 30 scientific publications.